WHAT THE BRITISH PRESS SAID ABOUT
I'LL BE BACK BEFORE MIDNIGHT!

Production History: Britain’s Salisbury Playhouse produced the British premiere, and later “Midnight” was toured all across Britain by The Century Theatre.  There have also been UK national tours in 2004 and 2005.  Ian Dickens Productions, the largest UK producer of touring plays (300+ productions), announced that the 2005 tour broke the company's box office records (NOTE: The UK version of the script is slightly different from the North American version).

It has been produced at Britain’s historic Theatre Royal, Windsor, starring Dennis Waterman, star of the British TV series “Minder” and “The Sweeney”, and many other professional theatres across the country including Theatre Royal Winchester, The Grand Swansea, Theatre Royal Margate, The Darlington Civic, The Octagon Theatre Yeovil, The Pomegranate Theatre Chesterfield, The Marina Theatre Lowestoft, The Palace Theatre Westcliff, The Middlesborough Theatre, The Joan Plowright Theatre and many others.  To see reviews of the recent production at the Oldham Coliseum (Near Manchester) click here.  In 2013 at the beautiful "Mill At Sonning Theatre" nestled on a scenic part of The Thames near London.

"Ghostly goings-on gripped the audience... somebody behind me screamed in fear and all of us were on the edge of our seats, but there were lots of laughs to ease the tension.  I was absolutely petrified... brilliant scary effects... superb throughout."  Sue Butterfield - The Telegraph

"Combining spine-chilling terror with laugh-out-loud comedy is no mean feat, and yet I'll Be Back At Midnight aims to have the audience jumping out of their seats with fear one minute and howling with laughter the next."  The Argus

From the Aldeburgh and Southwold Theatres: "This is a top-rate thriller that has the audience of the edge of their seats from the opening scene to the superb climax.  The play, although a tense thriller, has many moments of comedy which help relieve the tension and add to the enjoyment.  One minute the audience is laughing out loud and the next it is gasping at moments of shock-horror as the plot unfolds... it has all the ingredients needed by a tense thriller and the way the suspense builds and builds is simply tremendous."
David Lennard - East Anglian Daily Times

The world famous Cambridge Footlights (Monty Python, Beyond The Fringe, Borat) produced I'LL BE BACK BEFORE MIDNIGHT in 2007.  For details click here.

CLICK ON THE THUMBNAILS BELOW TO SEE LARGER REVIEWS 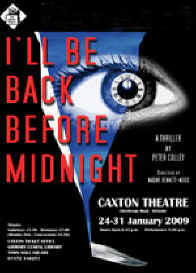 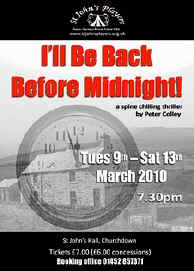 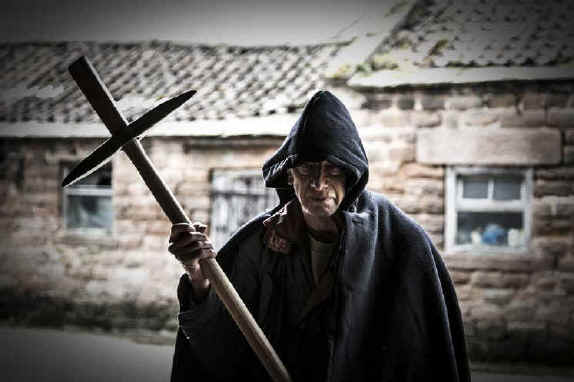 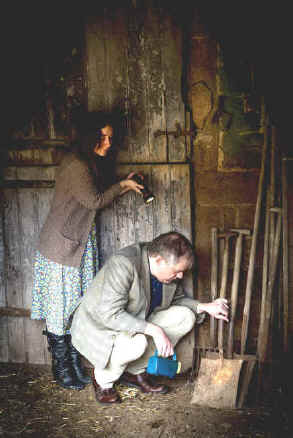 British version of this script available from:

Samuel French (London) handles the amateur and some professional rights of this play in the UK, Australia, New Zealand, and South Africa, and some other English-speaking countries.  For all rights contact the author at:

Back To Main "Midnight" Page