There are lots of elements that made Showboat’s production of “When the Reaper Calls”, a truly brilliant play. But what stood out most for me were the refreshing and surprising plot twists of this play written by Canadian playwright Peter Colley.

The script itself deserves a great deal of the credit for making this comedy thriller so entertaining. That’s right -- a comedy thriller. Rare is the play that combines these genres successfully, but “When The Reaper Calls”, is indeed equally as gripping as it is hilarious. 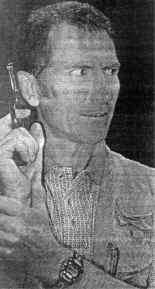 The play opens with two philosophy professors, Victor and Harlan, in a cottage country setting with their less-than-happy wives Dora and Colleen. Having known each other since childhood, Victor (played by Clyde Whitham) and Harlan (played by Shawn Devlin) have a history of playing practical jokes on one another, a practice that, Victor tells Harlan’s wife Colleen (played by Amy Walsh) has diminished from his best friend’s persona since Harlan’s ex-wife Helen, left him years ago. Harlan’s new wife, Colleen, admits to having noticed a coolness in her husband’s demeanor towards her, and agrees that he has been more than a tad neglectful of her lately. Victor tells Colleen of his idea for a prank that will shake some life into his formerly mischievous friend Harlan. He plans on inciting Harlan into picking up a carefully “planted” pistol and shooting Victor to make him realize his underlying passions.

Victor employs Colleen to pose as the bait for the prank to spin Harlan into a jealous rage and be goaded into performing the murderous act. However Victor has loaded his gun with blanks, an insurance policy that he will remain alive.

Meanwhile Victor’s disgruntled wife, Dora, (played by Marcia Tratt) thinks her husband is involved in yet another affair, as his past seems to be littered with them

She harbors a great deal of animosity towards Victor, a contempt that is heightened to a fever pitch when she overhears Victor and Colleen rehearsing their attempt to convince Harlan that they are carrying on an adulterous affair, mistakenly thinking it is a real affair. She also hears them plotting to plant the gun, filled with blanks, so that Harlan will be enticed to shoot Victor. Later, Dora switches the blanks for real bullets in her own attempt to re-plot her husband’s plot.

And this is where the play turns brilliant. Where most summer theatre offerings would have left the story there - the interminably un-guessable “When The Reaper Calls” is just beginning to play head games with the audience. Just when all transpires exactly as you figured it would, the play is stood on its head, and without spoiling the denouement - which is truly the best part of this play - let’s just say that nothing is quite as it seemed. Revelations tumble out until the final moment of the final act. You won’t want to miss one moment of this play.

And having talked about how wonderful the storytelling of this play is, has left very little time for credit to the actors or director, without whose talents there’d have been no play. In my brief synopsis I’ve left out the fine direction of Allison Grant and the comic relief supplied by Officer McGuire (played by Rey Baecher) which both deserve an ovation all on their own. Overall “When The Reaper Calls” is impeccably acted, directed and written, and, in my opinion, one of the most entertaining plays in the Niagara Region this summer. I can’t imagine that this play will be bested.